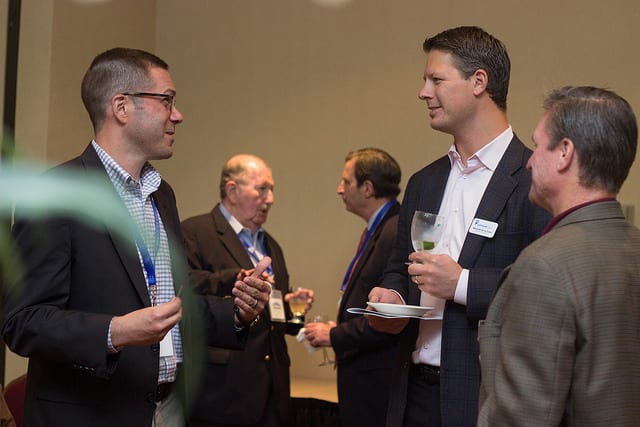 In what was referred by many as a ground breaking industry event. The Onsite Property Management Association (OPMA) hosted it’s Executive Summit May 11 – 12 in Atlanta promoting a unique and informative program agenda and format. The inaugural Summit brought together top industry speakers and OPMA members in an intimate meeting environment that resulted in an open dialogue and positive interexchange between the speakers and attendees.

The meeting format had the attendees, represented by senior executives of OPMA’s onsite manager and supplier membership base, positioned classroom style in a semi circle around each speaker. After each speaker presentation John Dalton, Chief Marketing Strategist for OPMA, moderated the lively interexchange dialogue amongst the Summit participants.

” I just returned from the OPMA conference in Atlanta and want to take a moment to thank the association for making it such a worthwhile experience. The 30 minute speaking formats and then 30 minutes of discussion were perfect for maximum information flow and they were relevant to what our industry is facing. I especially liked the selection of speakers and industry topics.”   —Matthew Brittain, Managing Director, Brittain Resorts, Myrtle Beach, SC

As a relatively new national lodging association OPMA understands the importance of focusing on a few extremely important goals. The speaker presentations, while different and unique, all tied back to the three major initiatives that OPMA has determined to be  immediate priorities and long term objectives for the association:

1) To define our lodging category and maximize awareness and recognition of the ” condo hotel” lodging experience with consumers, the travel and mainstream media, and a wide range of lodging industry stakeholders  including DMOs, the OTAs,  and the state and national lodging associations. The OPMA Board of Directors voted unanimously to join AH&LA as an allied member which would provide OPMA with a voice on a local, state, and national level and a broad based venue to promote our program platform and initiatives.

2) To continue our national campaign against illegal short term rentals  in our quest to not only level the  playing field but to tilt it in our favor.

3) To further expand our membership base whereby we can dominate the available condo hotel rental inventory in any one market and to identify and subsequently leverage the financial impact our collective efforts are having towards tax revenue generation and job creation with the destination Economic Development Councils.

” What an outstanding group of professionals you had organized for the first OPMA Summit. I have attended and even spoken at many conferences and meetings but never have I seen this intent or focus from a group on it’s initial gathering of members. Well done and looking forward to our nextSummit event. ” —Dennis DiTinno, CEO, Liberte Management, Treasure Island, FL

The four featured speakers at the Summit were:

2. Mindy Rehse, Senior Director – Global Partner Group for Expedia, Inc  –“Our vision and strategy for supporting and further enhancing the relationships with our hospitality partners”

” The OPMA Executive Summit provided me and my supplier colleagues a tremendous opportunity to meet and interface directly with C-level executive members of the association. I cannot think of a similar lodging  event that provides in one venue unprecedented  one on one access and quality time with the top decision makers within the condo hotel sector and overall lodging industry”   —Jim Olin, President, C2G Advisors, LLC, Franklin, TN

In addition to the general session presentations there was a significant amount of networking and side bar meetings between the speakers, the OPMA onsite managers, and the OPMA providers of goods and services …all key decision makers with their respective companies. The following represents a link to photos of the attendees finding the time to combine business and pleasure:

” The first annual OPMA Executive Summit brought a productive focus to several of the most critical issues facing our industry. Each topic addressed was presented by a highly qualified speaker as a ” state of the union” , and then carefully analyzed with the attendees to identify practical ways that we as onsite property managers can counter threats and maximize opportunities. The Summit was truly unique, tactical, and forward looking.”  —Mia Vlaar  Director of Sales and Marketing   East West Resorts   Avon, CO

The Executive Summit represents an important first step in our growth plans as OPMA has defined and articulated it’s goals . Our efforts will now be directed to collectively implementing targeted strategies and initiatives that will help us achieve those objectives. Based on the tremendous positive feedback that we have already received from the attendees we are already looking ahead to our next Executive Summit and other OPMA events.

For more information and questions about the  Executive Summit you may contact Rick Fisher, Executive Director for OPMA, at rfisher@theopma.orgor ( 877) 870 6510.