The American Hotel & Lodging Association (AHLA) is in the process of implementing a proactive strategy to rein in professional short-term rental operators. 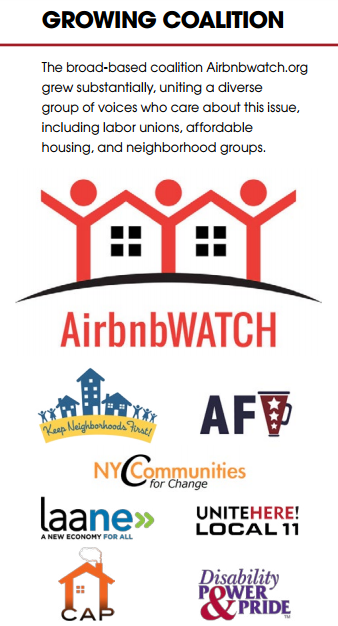 AHLA: “After working closely with AHLA for several months, Senators Brian Schatz, Elizabeth Warren and Dianne Feinstein sent a letter to the Federal Trade Commission (FTC) in July raising concerns about the short-term rental industry with respect to housing costs, racial discrimination, consumer protection, community safety, and inconsistent tax compliance. Further, the Senators requested the FTC to provide data on the degree to which the short term rental industry is comprised of commercial operators. The letter highlights our strategy of pushing for transparency while calling out the public policy issues and the need for a level playing field. Senator Warren’s status as one of the most prominent lawmakers among progressive activists has helped mobilize additional grassroots and political support.”

Leaked by the New York Times, below is the document of the minutes of the AHLA’s board meeting outlining the plan to keep Airbnb at bay as a “multipronged, national campaign approach at the local, state and federal level.”

AHLA Position: AHLA believes that there should be a level and legal playing field within the lodging sector, and that regulations and taxes with respect to short-term rentals should be strictly enforced. We support the rights of property owners to occasionally rent out a room or their home, but commercial operators within the short-term rental industry should not be allowed to operate outside of the law.

AHLA continues to move the needle in key areas for short term rentals, working with a broad coalition of affordable housing advocates, community groups, neighborhood associations, labor, and other progressive entities. Notable accomplishments from this year include:

Airbnb has grown exponentially in recent years and has an estimated market cap greater than any hotel company, and although it is the largest player in the short-term rental market, it does face competition from HomeAway (now owned by Expedia), Flipkey, and others. Policy debates are taking place around in the country in cities of all sizes, as well as in state capitals, and increasingly in Congress, about the appropriate regulation and tax collection for short-term rentals.

Objective: Build on the success of 2016 efforts to ensure comprehensive legislation in key markets around the country and create a receptive environment to launch a wave of strong bills at the state level while advancing a national narrative that furthers the focus on reining in
commercial operators and the need for commonsense regulation of short-term rentals.

To accomplish our objectives, we are focused on the following key strategic imperatives:

Research: To drive earned media, AHLA plans to roll out research that builds on the foundational data we compiled this year in conjunction with Penn State University, which revealed the rise of commercial operators. Topics under consideration are as follows:

Testimonial Campaign “My Neighborhood: To provide a counter-weight to Airbnb’s strategy of presenting a unified, working-class face, a cornerstone of the 2017 communications strategy will be our own testimonial campaign. We will harness the countless stories of real people across the country who have been negatively impacted by short-term rentals in their neighborhoods, whether it?s the working teacher whose apartment complex is overrun by drunken tourists, to the tenants who are evicted so their landlords can create an illegal hotel, these stories will resonate more profoundly with stakeholders and allow us to tap “ambassadors” for key campaign milestones. To accomplish this, we will:

Federal Legislation Enforcement: As short-term rentals and the “sharing economy” increasingly permeates the Beltway conversation, AHLA plans to press our position, either ourselves or through our allies, utilizing Congress and the legislative process. To that end, we have developed multiple legislative ideas, detailed below, that will also be an important mechanism to help us defend against messaging and initiatives by Airbnb or Expedia (on behalf of its subsidiary, HomeAway/VRBO):

Legal Response: Airbnb has filed or threatened lawsuits against several local and state ordinances claiming protection under the first amendment and a federal statute called the Communications Decency Act, specifically Section 230 of that Act. Airbnb claims it cannot be liable for policing its hosts, even with respect to the simplest of regulations such as outright bans on short-term rentals or licensing requirements. Holding Airbnb and the other short-term rental companies accountable is crucial, given the difficulty in enforcing the rules host by host, and our efforts for 2017 are focused on the following:

State and Local Engagement: At the outset, first priority will be to get the job done in outstanding major metro markets that we have previously identified as critical: Los Angeles, San Francisco, Boston, Washington D.C. and Miami. Further, while we will be encouraging state lodging associations to push legislation at the state level across the country, our targeted efforts, and greatest resource focus, will be on states and localities where we believe the right political conditions exist for us to push legislation across the finish line and that could be considered precedent setting.

In contrast, in certain states, primarily those with Republican legislative majorities, AHLA will be focused on stopping Airbnb’s efforts to pass statewide preemption language that would prohibit local municipalities from enforcing local zoning laws to restrict short-term rentals. Today, we believe these states are the most vulnerable to such legislation: Texas, Florida, Georgia, North Carolina, Utah, and Virginia.

Given the massive resources of Airbnb and other short-term rental companies to invest in every state and local battle, AHLA will also be focused more broadly on monitoring legislative activity. Building on this year’s early warning system with the state lodging associations, we want to make sure Airbnb doesn’t introduce harmful pre-emption bills or try and push tax collection only without our side mobilizing.

With the state AGs, we will build on the foundation from this year where we educated multiple AGs about the impact of short-term rentals on tax revenues, affordable housing, discrimination, and public safety. We will aggressively push state A65 to investigate short-term rentals that are
in violation of existing state law. Additionally, we will encourage them to become advocates with their legislatures to encourage enactment of new laws that will allow them to better enforce short-term rental activity in their states, as well as engaging them in the unfolding litigation landscape where possible.