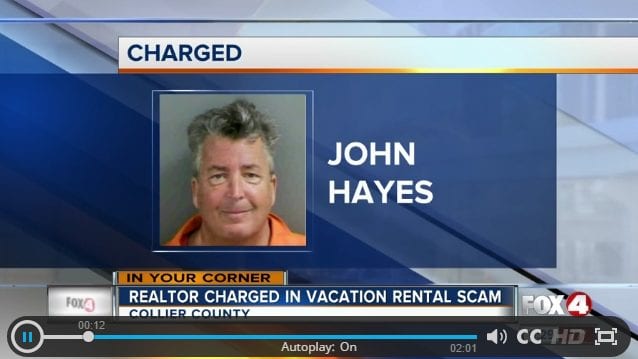 BONITA SPRINGS, Fla. – The Collier County Sheriff’s Office arrested a man over the weekend who they say victimized three people in a rental fraud scheme.

57-year-old John Joseph Hayes of Bonita Springs faces fraud charges after the victims reported that they paid him thousands of dollars in advance for the same rental unit during the same time period, between January and April.

The three women, each from a different state, found a seasonal vacation condo at Glen Manor on Fourth Street in Bonita Springs on the web site VRBO.com. VRBO stands for Vacation Rentals By Owner.

In one case, the victim told investigators that Hayes didn’t tell her the unit would be unavailable until three days before her arrival date, after she emailed him about how to get the key.

The other women were told that the unit would be unavailable due to a dispute between Hayes and the HOA for Glen Manor. According to Hayes’ arrest report, the three women paid him a total of $26,649.

Realtor Todd Gridley of Naples said that sites like VRBO.com screen the rental owners who advertise with them, so he recommends calling their customer service and checking that the owners are who they say they are.

“Once you hand over the money, the fees could be gone,” Gridley said. “So it’s always better to do your due diligence, and deal with someone that knows that market.”

According to the arrest report, all three women want to press charges against Hayes. Attorney Mike Chionopoulos said victims in a case such as this have a better chance at recouping their money in a criminal case rather than filing civil suits.

“The victims have to ensure that by going to the state’s attorney…and saying ‘we want any (plea) deal to include restitution, and we want him to stay on probation until his restitution is complete,'” Chionopoulos said.