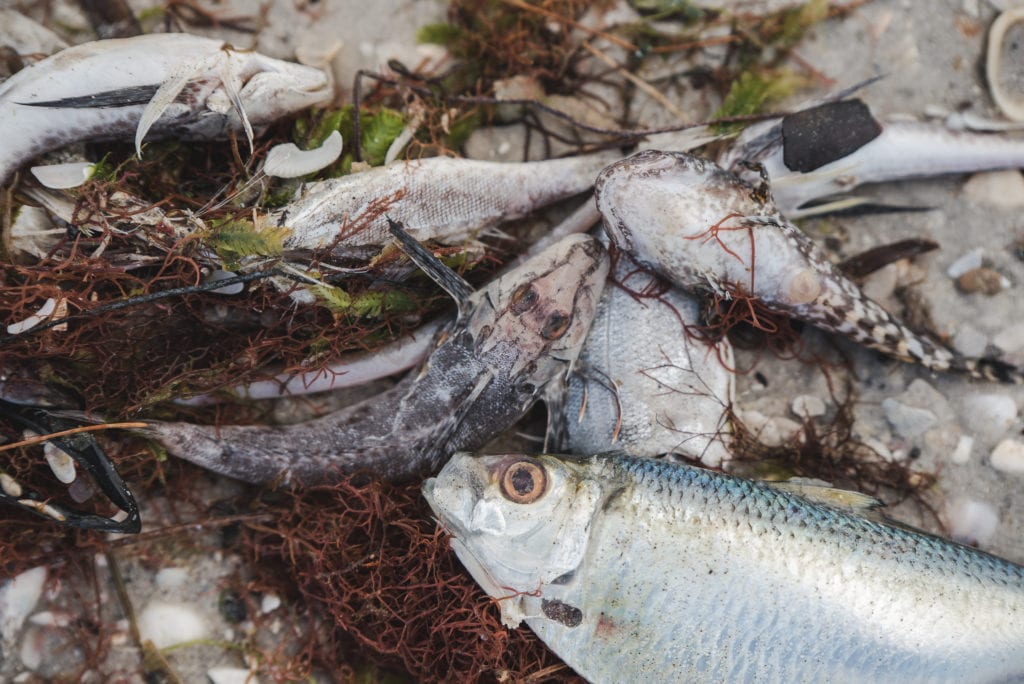 Red tides are not uncommon in the Gulf of Mexico, but the tide that started last October is one to be reckoned with. Red tides are blooms of algae that sometimes turn large flows of water a rusty color, giving them their name. They normally drift far offshore, but winds have pushed this particular bloom against the southwest Florida Golf Coast in recent months. With it has come the carcasses of thousands of fish, manatees, dolphins, crabs, eels, sea turtles, sharks, and other species, along with a rotting stench and burning toxic air causing counties to close popular beaches.

The culprit in this case is a plant-like alga named Karenia brevis, or K. brevis. This species produces brevetoxins, a neurotoxin that causes coughing, stinging, and teary eyes in humans. “You can really feel it in your nostrils, in your sinuses, back of your throat,” said Bill Weir in a CNN video report. “It’s like a mild pepper spray.”

But as irritating as the symptoms are to humans, the effects are often fatal for marine life. This particularly devastating red tide has been described by many locals as the worst they’ve ever seen. The Florida Fish and Wildlife Conservation Commission (FWC) reported levels of 1 million or more cells per liter, one thousand times as many as a normal, nontoxic level, in samples collected for weeks along the coast from Manatee to Collier counties. 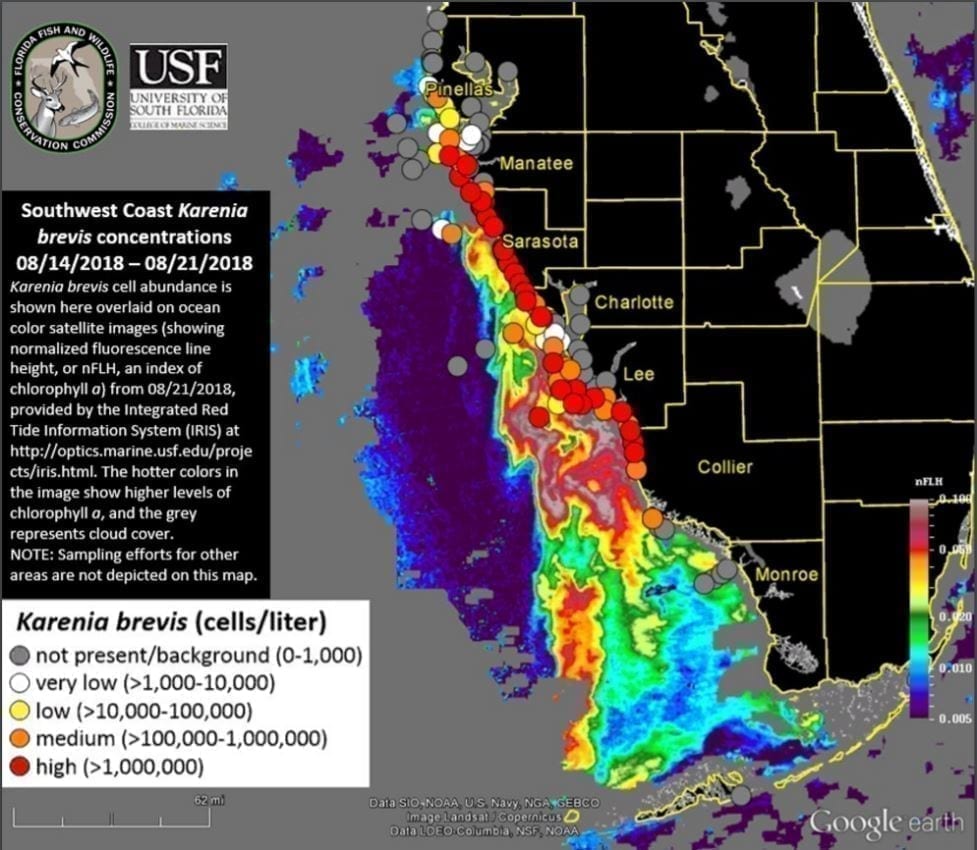 The Red Tide Rises on the Tourism Industry

While marine biologists, municipal crews, and volunteers work to clear the dead wildlife from beaches and canals, guests are canceling reservations and questioning whether they should book months from now. “We have seen a significant dip in rentals, approaching a 30% reduction on last year,” said Andy Moore, CEO of Gulf Coast Vacation Rentals and Gulf Coast Property Management in Bradenton, Florida. “Last minute bookings are non-existent.”

Judith Lee-Hemstreet, president of Sun Palace Vacations in Fort Myers, has had a similar experience. The red tide hit her area on July 25th, she said. “In a period of 24 hours, the beaches went from pristine to piles of algae and dead fish.” That week, Sun Palace refunded an estimated $20,000. The week after, refunds increased to around $40,000. “That’s college tuition,” Lee-Hemstreet said. Sun Palace’s normal summer occupancy is between 80 and 85 percent.

She said she even heard reports from the Publix nearby that guests who checked in the weekend after the red tide appeared returned the groceries they had just purchased for their stay and went home.

“This is as bad as I’ve seen it, said Rob Domke, luxury vacation rental manager for Gasparilla Vacations in Boca Grande. Usually red tides reach the coast over the last couple of weeks of summer, last for only a few days, and bring in a few dead fish, he said. “This has been a couple months of uninhabitable beaches.”

Normally this time of year is the slow season, Domke said. “The good thing is we’re used to not having as many folks down here,” he said. Still, he estimated around 50 percent of the reservations they did have this time of year had been canceled or rescheduled, and they had received no new bookings for August.

While it may be a silver lining that this time of year is not peak season, there is no way to predict when the red tide will end, fueling guests’ anxiety and property managers’ stress. Guests continue to call daily asking about what the conditions will be months from now. They have also called to ask why property managers didn’t tell their guests about the red tide if they knew about it last October, Lee-Hemstreet said.

“We haven’t seen an uptick in cancellations but the requests for refunds and compensation have been flowing thick and fast,” said Moore. “This has been challenging for my staff.”

“With hurricanes, we know the next steps, and we can see an end in sight,” Lee-Hemstreet said. With this, they can’t. “We feel helpless — we can’t fix it.”

Property managers aren’t the only businesses affected by the red tide. Water sports, fishing charters, restaurants, and other businesses have all taken a hit. Domke reported at least one charter fisherman he knows hasn’t booked a single trip in a month, even from locals who are the usual customers this time of year.

“Everything having to do with water is a huge impact on business,” said Lee-Hemstreet. “If you can’t use the water, people will go somewhere else.”

She and other property managers compared this event to the BP oil spill in 2010. “I think this is worse because it is not a one-off accident,” Moore said.

According to a CNN report, local CVBs and other agencies have reported business losses totaling $8.1 million so far, much of which only accounts for July. 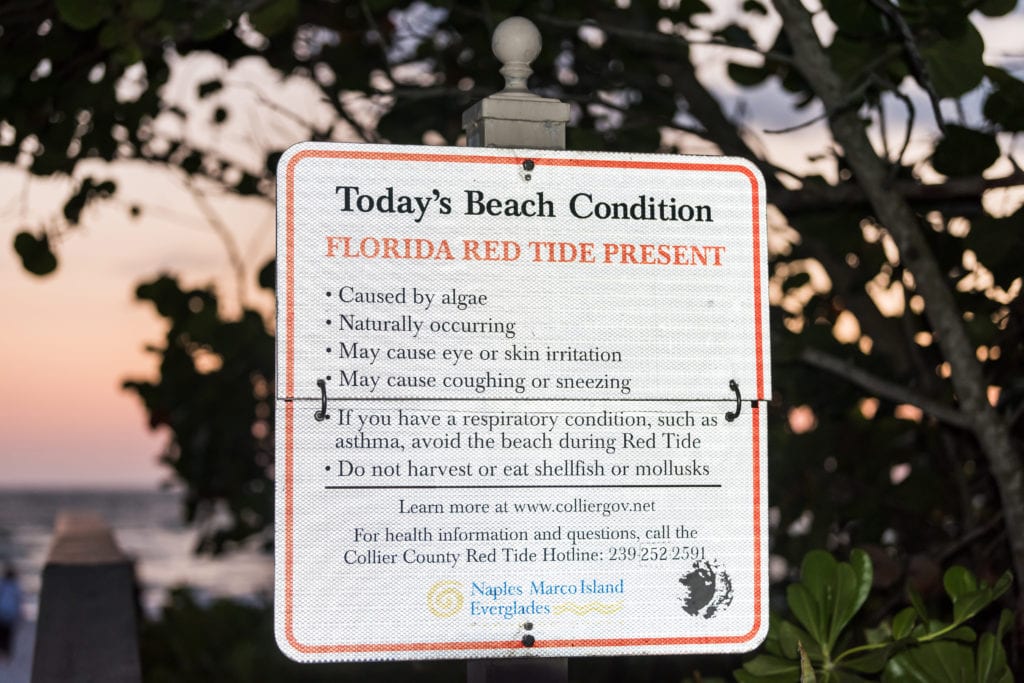 Meanwhile, canal communities just off the coastline are facing another algae issue: the “green slime” cyanobacteria blooms caused by agricultural runoff being drained out of Lake Okeechobee. Those waters are drained down the St. Lucie River to the east and the Caloosahatchee River to the west — right into the middle of the red tide zone. Green mats of algae are clogging the canals, which can suffocate plants and animals underneath when they can’t get enough sunlight. The dead algae and other organic matter flowing out of the Caloosahatchee, into Charlotte Harbor, and ultimately into the gulf may be feeding the K. brevis.

Mote Marine Laboratory is studying both issues. According to its red tide FAQs:

When Florida red tide blooms are carried closer to shore, they are capable of using nutrients from a variety of sources, including those carried from freshwater bodies out to sea. It is logical to expect that excess nutrient inflow to Charlotte Harbor — including nutrients carried by storm water runoff from land, as well as nutrients carried from land to sea by multiple means including total riverine input — could influence an existing red tide near shore by serving as additional “food” for growth of these algae.

More research is needed to determine if the current cyanobacteria bloom is affecting the current red tide. Mote is also testing ways to mitigate and control red tides, including a test in Boca Grande of the ozonation process it uses to remove red tide in its aquarium and sea turtle hospital waters, while also trying to keep up with recovering animals sickened or killed by the red tide.

Hurricanes can also play a role in exacerbating red tides by creating more storm run-off that flows into coastal waters. Last year’s Hurricane Irma may be one of many culprits in the current bloom. 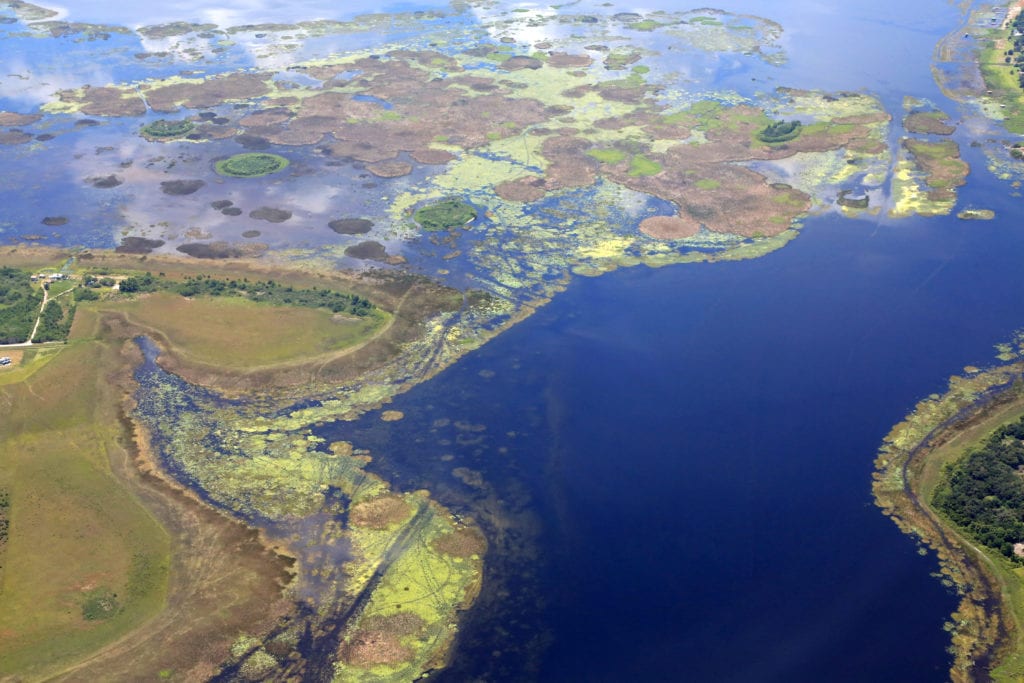 Aerial view of a blue-green algae bloom in Lake Okeechobee

In another attempt to address the problems, Governor Rick Scott issued a state of emergency declaration on August 13. The declaration makes additional resources available for clean-up efforts and directs funds to local municipalities and CVBs. Mote Marine Laboratory will receive $100,000 to support the rescue and recovery of affected wildlife. Lee County, where Fort Myers and Charlotte Harbor are located, will receive more than $1.3 million in grant funding. VISIT FLORIDA will receive $500,000 to provide grants to local tourism boards for marketing and PR efforts.

According to a VISIT FLORIDA press release on August 17, the organization launched two programs following the governor’s emergency order, one of which is the grant program for local CVBs. The other is a red tide recovery marketing program giving affected southwest Florida businesses six months of complimentary access to marketing opportunities with VISIT FLORIDA, including “enhanced web listings,” content distribution across its social and web platforms, brochure distribution in Florida welcome centers, and other activities. It will also develop a marketing campaign for the area to run after the red tide subsides.

For the property managers we spoke with, the state of emergency declaration is a short-term fix, not a solution to the bigger problems.

Domke had mixed thoughts. It brings awareness to the problem, he said. “If there’s a solution for it, great. If not, we just told the world there’s a massive problem here and it’s gross. […] How do you promote tourism when you can’t go to the beaches in Florida?”

“I do not see any leadership from the state level,” said Moore. “Florida’s number one industry is tourism. It’s not a political statement to comment that if we stay on the same track we are endangering our future, both environmentally and economically.”

Prior to the additional funding, Lee County departments were working to address cleanup efforts and marketing. According to the Lee County CVB’s August 10 email to its stakeholders,

Lee County Parks & Recreation staff has been cleaning county beaches, parks, and boat ramps affected by the red tide fish kill. The County has hired a debris removal contractor to assist in cleaning the beaches and shoreline. The City of Sanibel, Town of Fort Myers Beach, and Captiva Erosion Prevention District continue clean-up efforts in their areas. To date, more than 1,220 tons of material has been removed from our beaches and shorelines.

The email also states that the county’s tourist development council recommended that the county approve up to $1 million in spending on a marketing campaign after conditions improve.

“In the short term, in addition to an enhanced social media [effort], the VCB is providing customized responses to individual social media posts,” said Tim Engstrom, Lee County government communications specialist. “After the water clears, the advertising and marketing strategy with spending of up to $1 million will be implemented.” The details of the marketing campaign are still being worked out, he said. 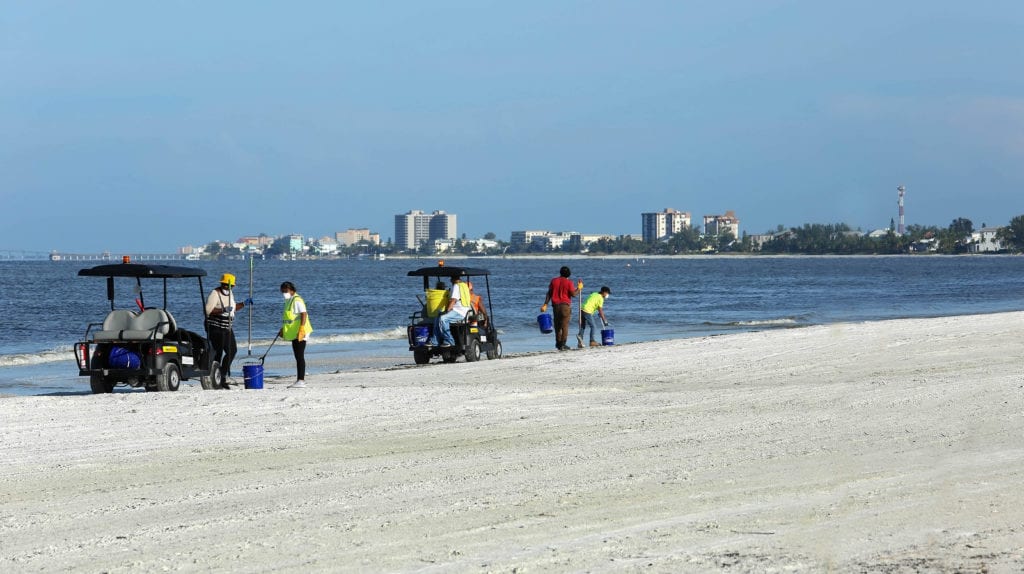 Some relief to the tourism economy may come in September with baseball and fishing tournaments currently set to move forward as scheduled. Still, mass media coverage focused on tragic images and footage of dead wildlife has compounded the lingering problem. In reality, the dead wildlife, ruddy water, and irritating air shift with the wind and water flows. Some days, many beaches look and feel as if the red tide never existed. Even so, that does not mean that the K. brevis algae is back to normal levels in the area. Updates on specific beach conditions can be found on Mote’s VisitBeaches.org interactive map.

Local businesses are also focusing on all there is to do on land in their destinations. “Basically, we’re still a beautiful southwest Florida beach with blue skies and palm trees,” said Lee-Hemstreet. The promotion isn’t just for visitors. “One of the things we’ve instituted on the island is to shop, eat, and drink locally,” she said. They are encouraging locals to spend money on the island because they are all hurting.

Domke is encouraging guests to do their research and be aware of the issue.

All everyone in the tourism economy in southwest Florida can do, however, is wait – not just for an end to this red tide as the area’s winter peak season approaches, but also for solutions to the bigger problems and the slow recovery of Gulf marine life.