Expedia makes more changes at HomeAway to compete with Airbnb

BY TODD BISHOP –Expedia’s longtime chief product officer, John Kim, a key player in the resurgence of the travel giant’s flagship site, has moved to a new role as the chief e-commerce officer for HomeAway, the vacation rentals company acquired by Expedia for $3.9 billion last year.

In addition, the Bellevue, Wash.-based company plans to start incorporating HomeAway listings on its Expedia.com and Hotels.com sites, using those flagship sites to compete more aggressively against AirBnB in major cities, in what’s known as the “alternative accommodations market.”

The moves were disclosed by Expedia’s chief financial officer, Mark Okerstrom, in a briefing with investors this morning, as the company outlined plans to expand the HomeAway business.

Okerstrom, who spoke on the call with Expedia CEO Dara Khosrowshahi, credited Kim with helping to bring the company’s flagship Expedia experience back to “technology greatness.” An Expedia spokeswoman confirmed that Kim has moved to HomeAway headquarters in Austin to join the team there.

The CFO described the HomeAway strategy in two phases. First, the company is seeking to improve HomeAway’s financials by boosting the share of overall vacation rental bookings that it realizes as revenue. Okerstrom showed the following charts to illustrate how HomeAway’s “take rate” is traditionally not on par with other competitors in the industry, despite strong bookings. 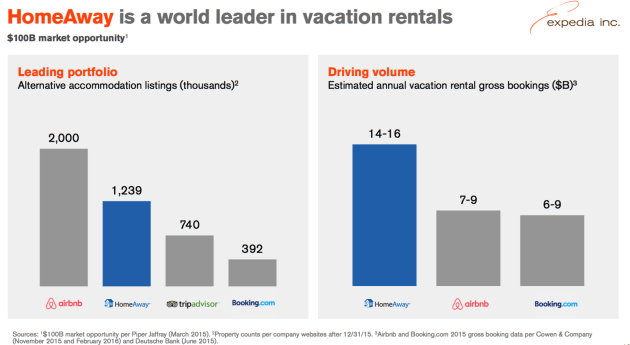 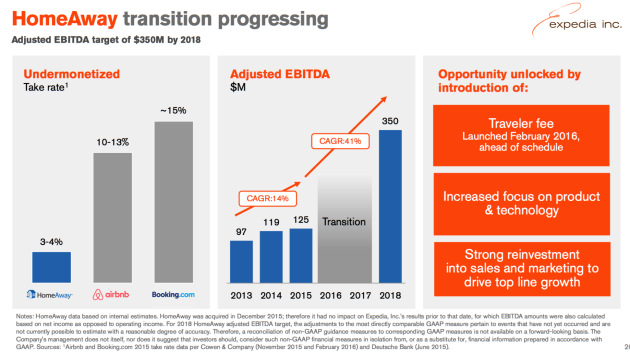 HomeAway introduced a new “traveler fee” in the U.S. last month to start to address that situation, in line with AirBnB’s existing practice. HomeAway’s new traveler fee is a floating fee, but it’s expected to average about 6 percent for travelers, according to an earlier report by travel news site Skift.

To help break into the urban markets, Expedia plans to include HomeAway listings among the options available to travelers on its flagship sites at some point in the future.

“The traffic to get into these markets is incredibly expensive. Buying keywords for New York accommodations is some of the most expensive traffic you can buy,” Okerstrom said. “The great news is that we’ve already got that traffic on Expedia and Hotels.com.”

Expedia Inc. CEO Khosrowshahi noted that the company will also be able to leverage its e-commerce architecture and optimizations from the Expedia platform to further boost HomeAway’s effectiveness. He reiterated that Expedia believes it can build HomeAway into a business with $350 million in earnings before interest, taxes, depreciation and amortization (EBITDA) by 2018, up from about $120 million last year.

“We like the trends that we’re seeing,” Khosrowshahi said, “but we are in the first or second inning of probably an extra-inning game here.”

LeisureLink® White Paper Explores Strategies to Help the Ski Industry Boost Their Summer Mountain Sales
Expedia on Homeway traveler fee: “We like what we see.”