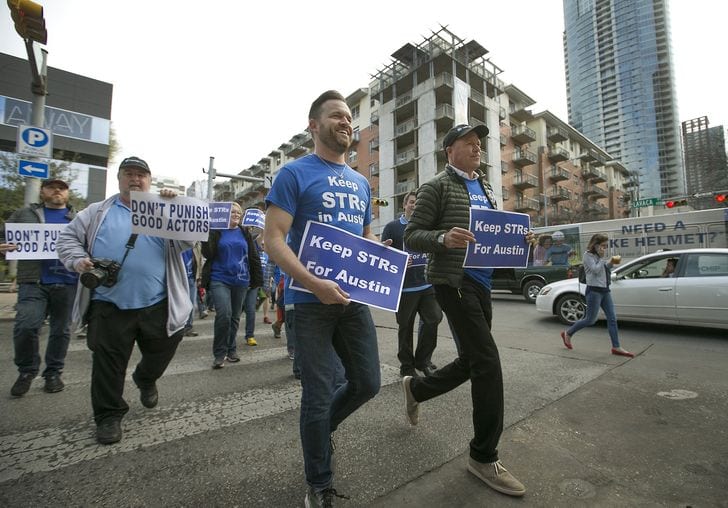 If you’ve ever thought about renting out your home on Airbnb or HomeAway, you might want to think again. Thanks to regulations, participating in the sharing economy is like playing Jenga outside during tornadic activity. The first — and probably the hardest — challenge is just getting everything set up with the overreaching city regulations. But keeping it up is no small task, either.

First, owners of short-term rentals (STR) — leases for less than 30 days — in Austin are required to obtain an operating license. But, as you might imagine, it’s not that simple.

By Andrea Alvarez and Allegra Hill – Special to the American-Statesman

The first challenge is figuring out which “type” of operating license you need. There are three categories for short-term rentals. “Type 1” rentals are owner-occupied single-family homes or units associated with an owner-occupied residence. Type 2 rentals are vacation or second homes not designated by the owner as a homestead. Type 3 units are those intended for multifamily use, such as apartments and condos.

Navigating this licensing puzzle does not guarantee an operating license. As of November 2015, the City of Austin implemented a ban on short-term rentals for all residential single-family homes, unless the owner lives on the premises. That means type 2 licenses are no longer issued.

What went into the conclusion that such actions needed to be taken? Basically, these vacation rentals were deemed “party homes,” thus the decision to ban them.

But this assumption does not align with reality. According to the City’s own data, in 2015 the vast majority of complaints against short-term rentals were actually against unlicensed properties. Of the 353 complaints made between October 2012 and August 2015, 200 were against unlicensed properties, meaning that about 57 percent of the problem comes from units that do not even have an STR license. In fact, less than 10 percent of all complaints were actually related to noise or occupancy issues in licensed STRs at all, and the majority of those were against owner-occupied rentals.

The ban on type 2 units represents yet another overly broad property law intended to protect people from undesirable, indefinable behavior. What constitutes a “party,” anyway? The meaning varies from individual to individual. So, rather than attempting to enforce the laws against troublesome “party” homes, the city restricted the ability of law-abiding homeowners to lease their homes at all.

Unfortunately, it did not stop there. After eradicating type 2 rentals, the city still attempted to expand the definition of “partying” behavior to affect other types of rentals. Now, guests in short-term rentals cannot participate in outdoor “assemblies” of more than six people between the hours of 7:00 a.m. and 10:00 p.m. What exactly is an “assembly?” According to the city, it is “group activities other than sleeping.” So short-term rental guests cannot hold backyard birthday parties, summer barbeques, or games of pickup basketball without risking a dreaded code citation.

Similarly, any “assembly” at a short-term rental — whether indoors or outdoors — between 10:00 p.m. and 7:00 a.m. is also considered “partying.” Bible studies, movie nights, and back-porch stargazing are no longer allowed.

These are only a few of the far-reaching regulations and prohibitions enacted by the city, all based on faulty assumptions about “party homes.” Yet, with such ridiculous regulations, will anyone actually comply? Unlikely.

What’s more likely is that the city will make it so hard to operate short-term rentals legally, that they will drive the rentals underground. Licensing a home as a short-term rental would simply be painting a target on your property, and putting the city on notice that you are subjecting your home to impossible regulations. Why draw attention to your home when you know your guests may stay awake past 10:00 p.m.? Why tell the city you’re renting out the property when you spent thousands of dollars installing a pool that accommodates more than six people? Why agree to forfeit hotel occupancy taxes when you’re forced to underutilize your six-bedroom home, and can’t charge enough to make a profit? Logically, licensing will no longer make sense. So, rather than fighting the tornadic activity, people will move indoors.

But the city has the ability to calm the storm entirely. The ban should be reexamined and the regulations revisited. It’s not too late.