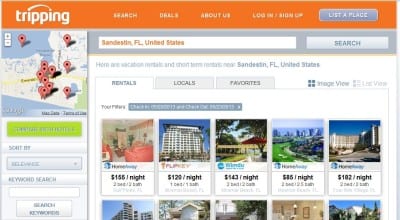 SAN FRANCISCO, May 20, 2014 —Tripping, which lets you search through thousands of vacation rental sites, has announced its Series A funding round.

The company isn’t disclosing the exact amount raised, but sources tell Business Insider it’s in the $5 million to $10 million range. This investment is one of the largest in the travel space this year.

Tripping can best be described as the Kayak of vacation rentals. It uses metadata to scrub millions of listings on other sites — such as HomeAway, Booking.com, and Wimdu — and surfaces listings that most closely match your search criteria.

You can then compare the listings by price, reviews, star ratings, and locations. It’s one of the first players to use metasearch in the $100 billion vacation rental industry.

Tripping launched in 2010 at TechCrunch’s Disrupt. Before this round of funding, it raised $1 million in seed funding.

The deal was led by Tripping’s female CEO, Jen O’Neal. Only between 4% and 7% VC funding goes to women-led businesses.

The round was co-led by Recruit Holdings and Quest Venture Partners. Tokyo-based Recruit Holdings is one of the largest privately held companies in Asia, which has built several travel businesses, including one of Japan’s largest online-booking sites. They’re also known for having acquired Indeed.com for roughly $1 billion and being an LP behind several notable VC firms on Sand Hill Road.

“This is still a new concept, so the fact that Recruit wanted to co-lead the round shows that we’re onto something,” O’Neal told Business Insider in an interview. “We’re going after an area in the travel space that isn’t completely saturated, so there is huge opportunity for growth.”

Also joining the round are Erik Blachford (former Expedia CEO), Fritz Demopoulos (founder of metasearch giant Qunar), and Shawntae Spencer (an NFL athlete), among others.

“This new capital will enable us to innovate quickly on the product, expand strategically into new markets, and fulfill our mission to help travelers find the perfect place to stay on their next trip,” O’Neal says. “We’re grateful to our Seed investors for letting us take a chance on an unproven concept. Now we’re ready to scale.”