Timing is Everything: The Impact of Seasonality on COVID Recovery for Southeast Destinations

Timing is Everything: The Impact of Seasonality on COVID Recovery for Southeast Destinations

It’s easy to make blanket statements about vacation rental performance. Throughout this year, we’ve heard many of them:

These statements have been widespread as the industry has scrambled to react to the COVID-19 pandemic, Understandably so, but not always rightfully so.

The wide-ranging performance of markets in the Southeastern United States is an excellent example of why overarching statements can be misleading. On the extreme ends, the average vacation rental in Nashville, TN, saw a 60% decline in revenue per available rental (RevPAR) this year, while Galveston Island, TX, saw a 31% increase. 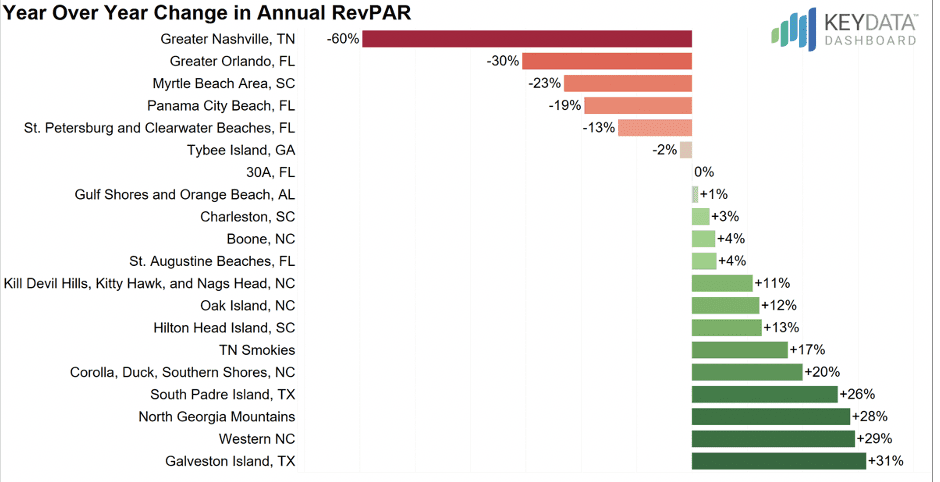 While disparities such as condos vs. houses, urban vs. leisure, and luxury vs. budget contribute to the annual performance of southeast destinations, growth or decline in revenue for the spring and fall had a much larger and more reliable impact on destinations’ 2020 performance compared to 2019. 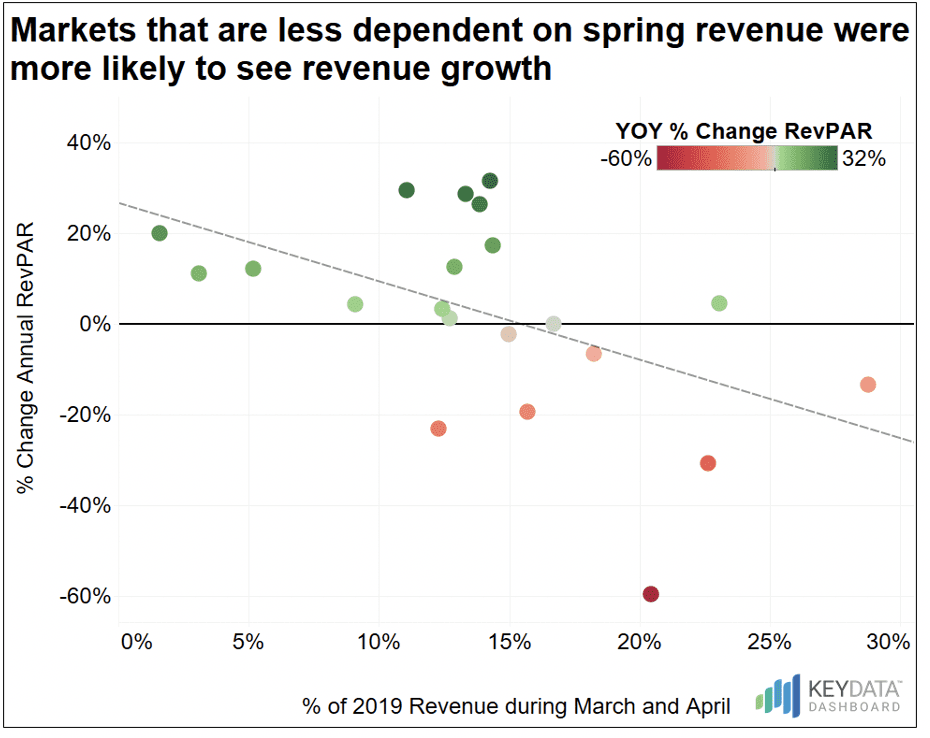 The sweeping shutdowns that went into effect during the early stages of the pandemic were in place from mid-March to late-May or June in most states. This left markets that depend heavily on spring break revenue in a precarious situation. As the graph above shows, markets with a larger reliance on March and April revenue were less likely to fully recover by the end of the year. Florida’s St. Augustine Beaches were a notable exception, as rentals there received 23% of their 2019 revenue during March and April, but 2020 RevPAR exceeded 2019. 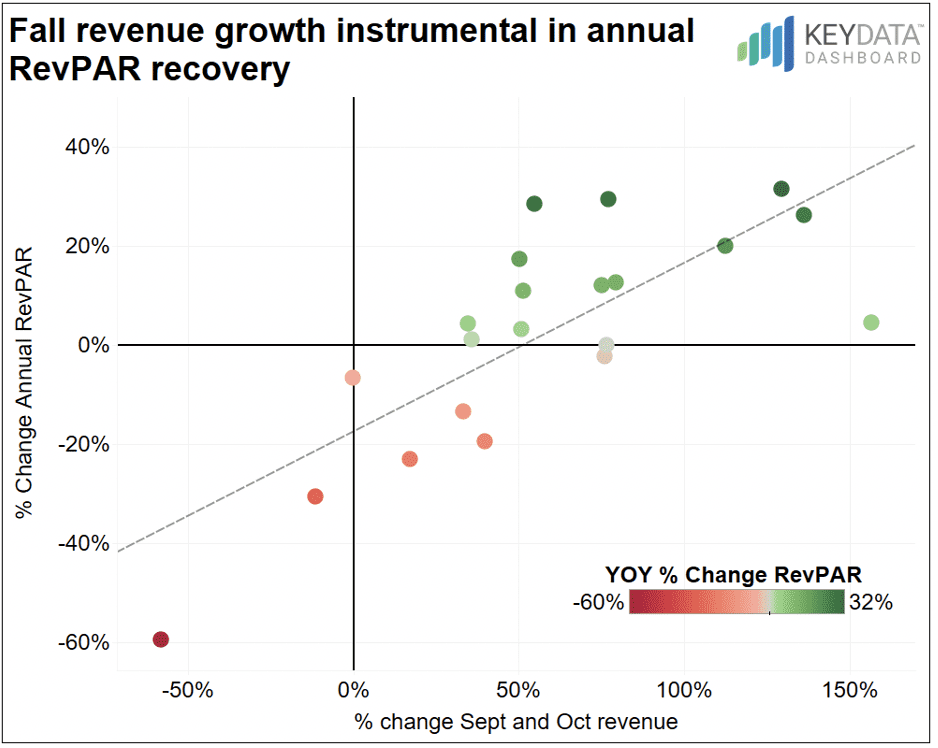 Strong revenue growth during the fall was instrumental to full recovery from the pandemic. The St. Augustine Beaches were able to exceed 2019 RevPAR despite a heavy reliance on spring travelers because their revenue during September and October was 157% higher than last year.

The relationship between fall performance and annual revenue was the most significant and strongest we explored.

Travelers seemed to take advantage of remote working/learning to take an extra fall getaway. This led to significant year-over-year growth for the fall seasons in many destinations, which—in turn—contributed to annual revenue growth.

The year-over-year (YOY) change in year-to-date (YTD) RevPAR by month, as seen in the graph below, further shows the importance of fall revenue to annual vacation rental destination performance.

Markets such as Orlando, Panama City Beach, and Myrtle Beach, where annual RevPAR never returned to last year’s value, plateaued during the fall. Increases in September and October revenue provided the boost that areas in Florida such as St. Pete-Clearwater and 30A (South Walton) needed to make up for lost spring revenue to nearly break even. 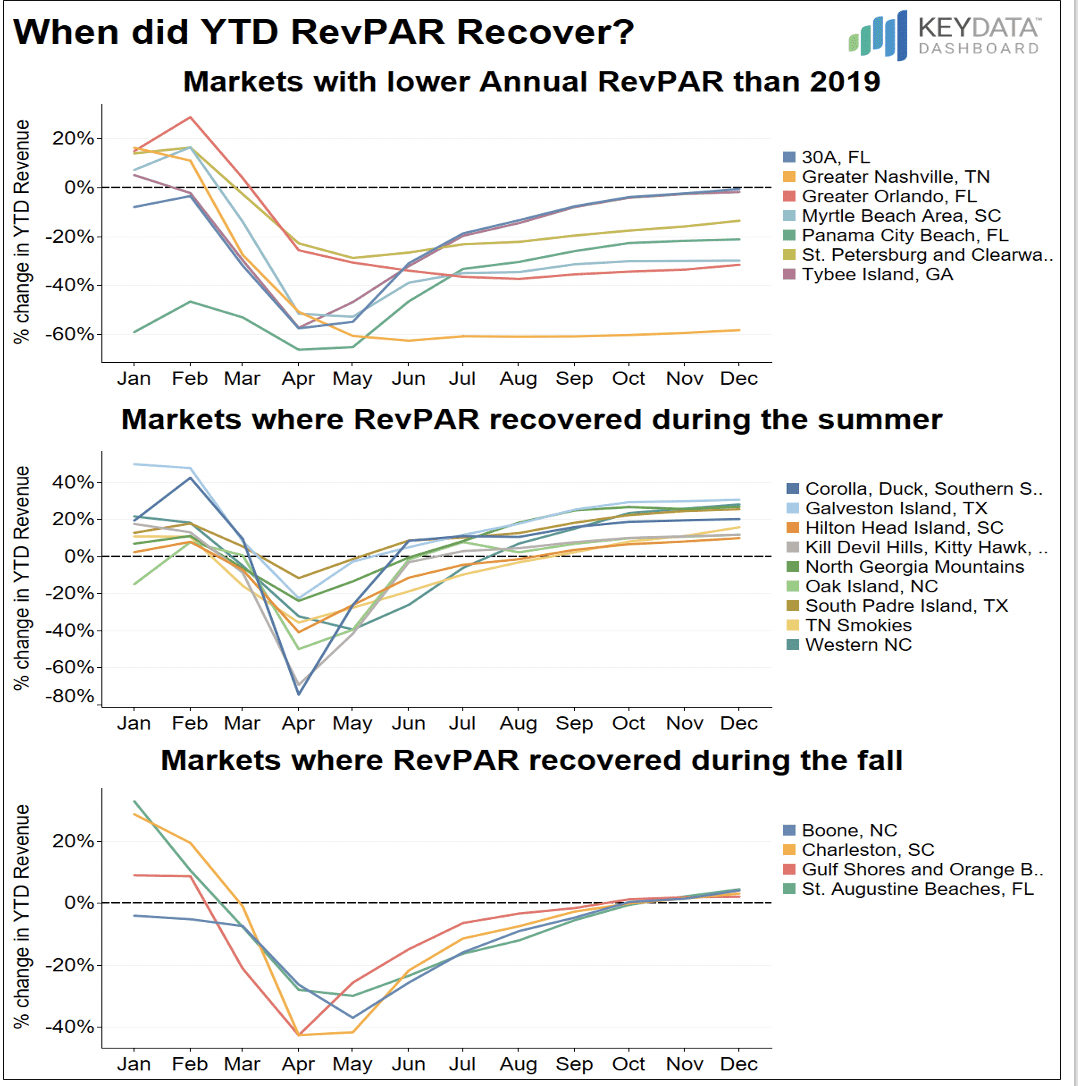 The middle category of destinations, including the Outer Banks of North Carolina, several mountain regions, and other beach destinations, had a strong enough summer to catch up to last year’s revenue by August despite declines during the spring. However, many of these destinations plateaued close to last year after July, and the real year-over-year growth occurred during September.

For the final category, which includes Boone, N.C., Charleston, S.C., Gulf Shores, AL, and the St. Augustine, FL area beaches, the fall months were the boost they needed to fully catch up to 2019 revenue numbers. After October, their annual values slightly exceeded last year.

The importance of shoulder seasons for annual performance was proven during 2020.

Reliance on spring revenue was a vulnerability, while being able to capitalize on fall travel was a major strength. Property managers and destinations should no longer overlook the fall season—off-peak travel is crucial to strong annual performance and may even prove to be a more enjoyable experience for travelers.

The Principles That Have Guided Meredith Lodging through the Global Pandemic, Raging Forest Fires and Personal Family Challenges
Latest Round of Paycheck Protection Program Includes Up to $2 Million Loans for Some Vacation Rental Business Owners