The bed bug mystery: And what you can do about it 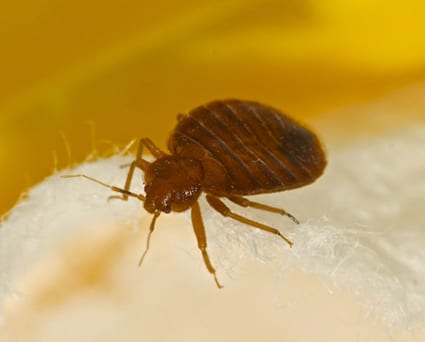 The bed bug mystery: And what you can do about it
VRM Intel Staff

This article is courtesy of the Vacation Rental Managers Association. Learn more about joining the vacation rental industry’s trade association.

Bedbugs: the very name conjures, like the word plague, the damp, infection-ridden Middle Ages. In fact, the old couplet every child knows that rhymes “night” and “tight” with “bite” dates back to America’s colonial era, when bedbugs commonly infested taverns, inns and boarding houses. Bedbugs were a common, though not plague-ish, problem for centuries. Oddly, wealthy people sometimes suffered more than poor people: one factor that helped the homes of the poor from being completely overrun was lack of central heat. The cold of winter tended to cut down bedbug populations in poorer communities. On the other hand, the first mattresses not made from organic, bedbug-attractive materials such as straw, which only the rich could afford, appeared commercially in the late 19th century. It wasn’t until the 1940s that bedbugs finally ceased to be a common worry in the U.S., when effective pesticides including DDT eradicated the pests – which means, of course, that most Americans now living think of “good night, sleep tight, don’t let the bedbugs bite” as a saying rather than a health precaution.

So why are we worrying about them once more? And what can vacation rental companies do about owners and guests who are worried about the tiny, gruesome pests? When the Waldorf Astoria in New York City gets sued by guests who claim to have been dinner for bedbugs while staying at the venerable hotel, as happened last October, the hospitality industry knows it has a real problem on its hands – or in its mattresses.

For reasons that bug-studying entomologists are still trying to figure out, bedbugs returned with a vengeance in the mid-1990s after nearly vanishing following the introduction of DDT after World War II. “The first time I saw one that wasn’t dated 1957 and mounted on a microscope slide was in 2001,” Dr. Dini Miller, a cockroach expert at Virginia Tech, told the New York Times in 2010.

One theory suggests that when pest control companies stopped spraying for cockroaches in the 1980s and switched to poison baits, bed bugs rebounded because they do not eat baits. But the primary theory of the moment is that the surge in bed bugs was caused by a new strain, resistant to common anti-cockroach insecticides, that was introduced into the U.S. from abroad. Now they’ve become such a problem that the Environmental Protection Agency and the Centers for Disease Control and Prevention issued a joint statement on bedbug control. The good news in all this, if it can be called such, is that bedbugs, unlike ticks, mosquitoes, lice, fleas, cockroaches and tsetse flies, don’t transmit disease.

Bedbugs are devilishly difficult, and often quite expensive, to kill. They’re both tenacious and voracious – a hungry bedbug in search of a host will suck blood from another bedbug if need be. Researchers in South Africa fed bedbugs the AIDS virus to see what would happen; the virus died. The hepatitis B virus will live in a bedbug but doesn’t harm the pest. They’re adaptable, too: research suggests that bedbug immunity to pesticides is growing. Not to mention: being bitten by one while you sleep otherwise peacefully in the sanctuary of your warm bed is just plain creepy. “People call me all the time, losing their minds, like it’s a curse from God,” said Dr. Miller.

Michael Raupp, an entomologist at the University of Maryland, says bedbugs troopers love to travel in luggage and clothing along with their human hosts. That’s how bedbugs are showing up in movie theaters, college dormitories, buses and planes, laundromats, libraries, summer camps, homeless shelters, nursing homes – even hospitals. Their love of travel means bedbugs are arriving in and infesting vacation rentals, too.

“They’re really not just for bedrooms anymore,” says Raupp. “They really have become widespread almost in any kind of establishment where people live and sleep, throughout both small and large cities.

It’s important for managers, homeowners and guests to understand that bedbugs are not a sign of poor sanitation, poor housekeeping or general uncleanliness – not in theway the presence of cockroaches can signal a less-than-clean dwelling. “We’re now in the era where people travel everywhere,” he says. “They just don’t go to major cities like London or Paris. We have people going to second-world countries and third-world countries where, frankly, bedbugs are commonplace. And these guys are real troopers – they’re hitchhikers and stowaways. Whenever we travel, there’s always a possibility that we can bring bedbugs home with us” – or into a vacation rental.

Richard Cooper of Cooper Pest Solutions and co-author of the “Bed Bug Handbook, The Complete Guide to Bed Bugs and Their Control,” says that a bedbug infestation can cause tensions in the owner-manager relationship, because owners of infested homes tend to see themselves as victims and mayblame their property management company for not taking steps to prevent the outbreak. Guests reporting bedbug presence tend to blame the management company too.

Legally, this can get tricky.

“Managers will find themselves hardpressed to convince a judge or jury that they didn’t have information available to them to take a proactive stance or implement all of the correct steps when responding to a tenant reporting bedbugs,” he says. In fact, even in parts of the country where bedbugs are just emerging and are truly a new problem, lack of awareness is not likely to be an acceptable excuse, due to the incredible amount of national press, along with the availability of resources on the Internet. He adds: “It should be clear to all that bedbugs are a pest that is not going away anytime soon, if ever. It is time to stop asking the question, ‘Why are bedbugs back?’ and instead start asking, ‘What can we do to get in front of this problem?’”

Early detection, he says, is the single-most important factor for management companies to take advantage of. This requires the cooperation and understanding of homeowners, who may resist the notion that their vacation home could ever host bedbugs. A little diplomacy goes a long way in these situations, Cooper advises.

Moreover, if bedbugs are found in a home, it increases the possibility they’ll have infested neighboring homes. “It is important to understand that once a bedbug infestation has been identified, one or more of the surrounding units may also be infested, or become infested, before the primary infestation that was identified has been eliminated,” he cautions.

Cooper suggests managers take the following proactive steps before any problems are found:

Managers and owners can take active preventive steps, too. One effective preventive treatment that doesn’t involve chemicals or sprays is heat, points out Paul Bello of PJ Pest Management Consulting. “Recent industry literature cites temperatures as low as 113 degrees F for about 30 minutes is sufficient to kill bedbugs,” he says. “But it’s likely best to be conservative to achieve the desired result.” He adds that a simple magnifying glass no more expensive than a couple of dollars is an invaluable bed bug hunting tool.

Bring a good LED flashlight, too. The chief places to look for signs of bedbugs are mattresses – “Why crawl further than you have to for your next meal?” asks entomologist Michael Potter of the University of Kentucky – and box springs, plus the bedframe. Bedbugs prefer to hide in places where they won’t be disturbed by vacuum cleaners, etc. In hotel rooms with a bedbug problem, the pests are often found in headboards. Why there? Because hotel housekeeping staff usually change the sheets daily on mattresses – a disturbance, then, for a bedbug. The same can be true in vacation rentals.

“Plastic bags can be your best friends in bedbug control and avoidance,” Bello advises. Unlike cockroaches, bedbugs cannot climb smooth surfaces, so if your owners are storing any clothing or linens in their vacation homes, make sure they’re stored in plastic. “The more things and areas you can make off limits to bedbugs, the better,” he says. As a mattress precaution, he recommends plastic covers made by Mattress Safe and Protect-A-Bed.

Before the exterminators are brought in as a last resort, Bello recommends some effective and less costly methods (exterminators can cost $500 or more, sometimes much more, per room for bedbug elimination). Steam, for example: “It’ll kill 100 percent of the bedbugs and bedbug eggs it comes into  contact with.”

He recommends continuous-fill professional steamers rather than steamers designed for removing wallpaper. Pest strips containing DDVP (2,2-dichlorovinyl dimethyl phosphate, a.k.a. Dichlorvos, which is an organophosphate) are also very effective – but will kill only bedbugs that come into contact with the strip. Bedbug traps such as the “Climb Up Interceptor” offered by McNight are effective and cheap, according to Bello. Bedbug-sniffing dogs are available for hire, though not in every region, especially remoter resort areas.

Steve Bjerklie has been writing for the VRMA review for more than 10 years. He also writes for The Economist magazine and several other publications.