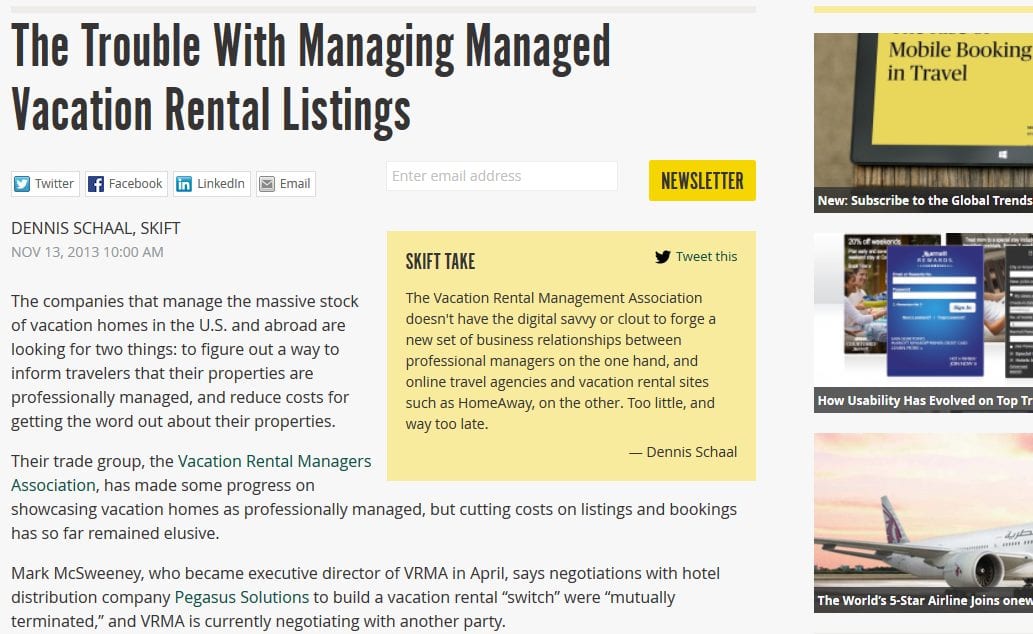 Yesterday, Skift Editor, Dennis Schaal, published “The Trouble with Managing Managed Listings,” in which he discusses the Vacation Rental Managers Association’s (VRMA) ”Switch” initiative. While several of his points have some validity, Mr. Schaal may be missing some of the background and context of the progression of the VRMA Switch.

What is the VRMA Switch? In 2010, VRMA announced a plan to create a “switch,” which they defined as “a centralized location for vacation rental managers that would allow managers to easily–and at a low cost–select distribution channels, allow distribution channels to access vacation rental inventory in a well-structured format, create a revenue stream for the switch builder and software companies that participate, and help VRMA fund industry promotion efforts.”

In his article, Schaal states,” HomeAway, Expedia, and Booking.com have the audience and the clout, and if the vacation rental switch ever comes to be, its leverage with the big distributors would be suspect.”

In context, HomeAway’s partnership with Expedia doesn’t execute until 2014, and Booking.com added a limited number of vacation rentals to its inventory less than a year ago.  In late 2009 and early 2010, when the idea of the Switch was forming, the online competitive landscape looked a little different than it does today.  In 2009, for instance, Airbnb was playing “show and tell” at Y Combinator.

Let’s look at the progression of the Switch in relation to market conditions. 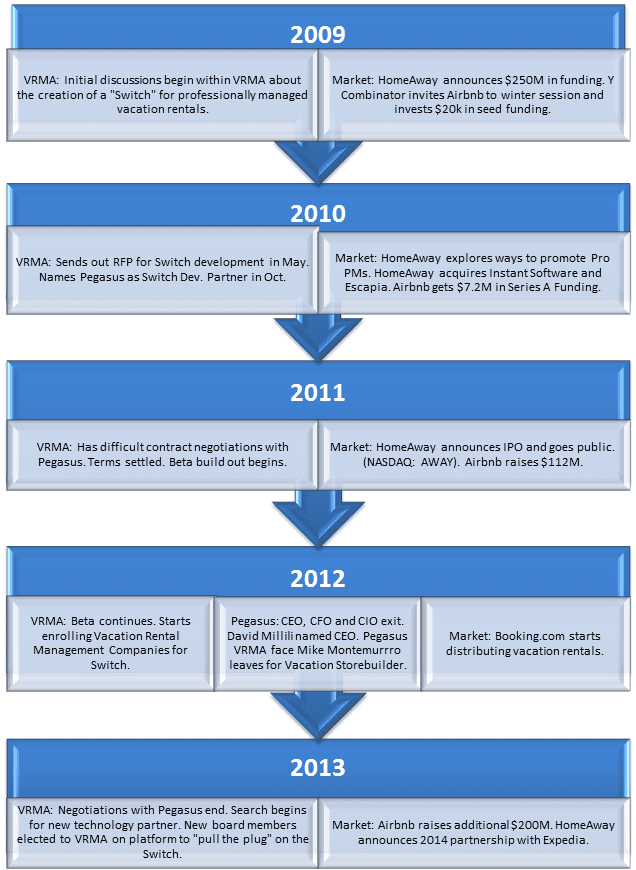 In early 2010, formal discussions began about the possibility of the VRMA facilitating the creation of this global distribution system (GDS), a.k.a. Switch, for professionally managed vacation rentals. Several software companies and industry leaders met in January 2010 to talk about how it might work. One software company offered to build it for VRMA, which leadership declined.

At the time, there were valid reasons to explore the creation of an industry switch.

An RFP was sent out in May 2010, and Pegasus Solutions was named the technology partner in late 2010. Throughout 2011, the terms of the contract proved difficult to negotiate. At one point, VRMA walked away and began searching for another technology provider. However, after further negotiation, Pegasus and VRMA agreed to terms and decided to move forward. The beta build out began, and enrollment started for VRMA members.

Schaal asserts, “The Vacation Rental Management Association doesn’t have the digital savvy or clout to forge a new set of business relationships between professional managers on the one hand, and online travel agencies and vacation rental sites such as HomeAway, on the other. Too little, and way too late.”

Let’s think about this.

Schaal says the VRMA doesn’t have the digital savvy to succeed in this endeavor. When the VRMA looked for a technology partner to develop the Switch it chose Pegasus Solutions, one of the four leading GDS providers in the hospitality industry.

Pegasus is the single largest processor of electronic hotel transactions and provides distribution for 100,000 hotels worldwide. Every indication showed Pegasus was the optimal partner for this technology product.  In all fairness to the VRMA, they chose the company who appeared to be the most “savvy” partner in the marketplace. 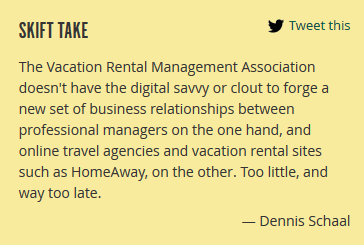 The VRMA has seen record growth in the last year. Yes, it represents less than 25% of the industry…as a direct result of the fragmented nature of the industry. The association has made enormous strides in promoting professional management in a market where “Rent by Owner” is overwhelmingly supported. The organization also provides outstanding education and networking opportunities for Vacation Rental Management Companies.

Whether the VRMA should be in the business of negotiating rates and contracts with OTA’s and own the relationship between the VRM and the OTA is a very different question. Members of the association are split on the issue. Regardless, the VRMA is undeniably the strongest and most influential association in the industry.

Is the Switch still a viable project?

As noted in the timeline above, the online distribution landscape changed.

As Schaal points out, “VRMA wants professionally managed properties to stand out when companies offer them on Airbnb, for instance, so travelers will know they are getting quality service, and not an inconsistent or shoddy experience.”

Most consumer facing websites have responded, including HomeAway, FlipKey and Booking.com, who have provided branding options and ways to designate a property as professionally managed.

In addition, API and XML integrations with software companies have opened up, now with enhanced normalization of complex property data. So far, booking costs have stayed within a workable range. The free market appears to be quickly catching up to the needs of the professionally managed vacation rental industry. But. Mr. Schaal, this was not the case when the Switch was initiated in 2010.

With the newly elected VRMA Board of Directors, the debate around moving forward with the Switch initiative will happen this year. Whatever the association decides, it will undoubtedly learn from the lessons of the past and continue to grow and thrive in the future with an unwavering dedication to promoting the professional management of vacation rental properties.

Just for fun:  If you’re looking for a blast from the past, I wrote this blog for Instant Software in June 2010 (before it was purchased by HomeAway).

Why the Switch? Why not the Switch.
Florida State Senator Seeks to Repeal Law Protecting Vacation Rentals