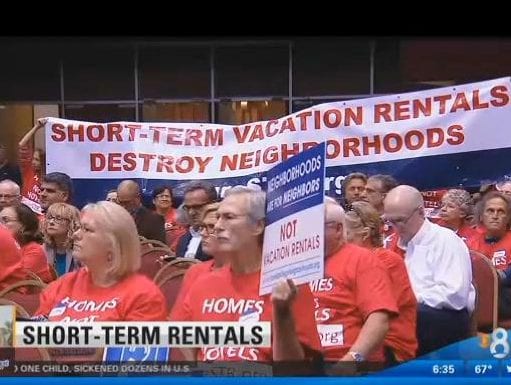 The San Diego City Council members voted 7-2 to reject a proposal by council President Sherri Lightner that would have prohibited short-term vacation rentals in neighborhoods zoned for single-family homes. Councilwoman Lorie Zapf was the only colleague to support her plan. In addition, the city council directed staff to develop a comprehensive set of regulations governing vacation rental properties in San Diego, and bring them back for consideration within four months.

According to Matt Landau, “This HUGE news for the people of San Diego and anyone else in a short term rental hot zone.”

Landau summarized the meeting (below) and what it means to other cities looking to regulate vacation rentals.

Today was an enormous win for STRASD members. After more than 5 hours of public comment, the Lightner proposal to ban home-sharing & rentals was shot down by a vote of 7 to 2. We are encouraged by the Council’s level-headedness, and their sincere desire to bring about a future fair ordinance to regulate Short Term Rentals for all San Diegans.

Some highlights from Council’s debate on the dais:

Does it get any better than this? This was stellar work from our electeds today!

Todd Gloria was THE super star. He proposed an alternative motion: the Mayor’s office should work out a budget for Code Enforcement; that DSD, Planning, and the Mayor’s office work on an ordinance framework to regulate STRs; and then run the whole process through the Smart Growth and Land Use committee for the public to weigh in.

Lightner wanted to know if it could include a rapid response for complaints/enforcement.(This seems like a good idea.)

After a little more debate, and with some input from City staff, the council was assured that we could likely review an ordinance within 3-4 months. Gloria’s motion passed 7-2.

So, what this means is that early next year, we will be looking at an ordinance to regulate STRs!

What You Can Do

A big win today thanks to your tremendous turnout is not a total victory. Short Term Rentals remain in a precarious position in San Diego and a long road lies ahead. So STRASD leadership is asking for your help. If you are interested in taking a more active role in the STR debate please respond to this message and let us know! We’re looking for additional organizing board members and appreciate anyone willing to lend a hand.

For more information, go to: http://www.vacationrentalmarketingblog.com/inner_circle_digest/