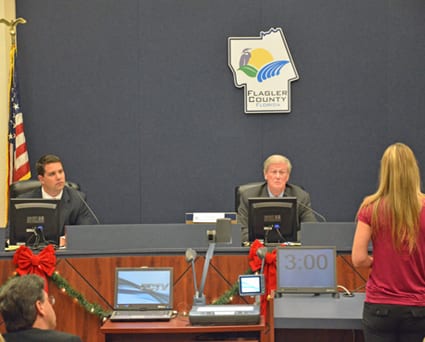 It’s usually the sort of issue that heats up city or county government, not legislative, meetings. But in 2011, the Florida Legislature, ostensibly stocked with small-government Republicans who claim not to meddle in business or local governments’ affairs, passed a bill that forbids local governments from regulating short term or vacation rentals, let alone ban them. Among the prohibitions: no county or city may impose occupancy restrictions on vacation rentals. So even a single-family house could be termed a “resort dwelling” if it’s rented more than three times a year. That house could be filled with many more than one family at a time, a contradiction with common local zoning regulations that the state law does not resolve. Conflict was inevitable.

In Flagler County, the conflict has exploded in the Hammock, where many homeowners who bought their houses for enormous sums during the housing bubble found themselves facing a stark choice: lose the house, declare bankruptcy, or turn the property into a short-term rental. Many did just that.

It’s been a boon for some, among them Steve Milo, owner of Vacation Rental Pros, a Jacksonville-registered company (Milo lists his address as Atlantic Beach). It’s been a horror for Steve Kopec, an eight-year resident of Ocean Oaks Lane, where he describes the last year as “a living hell because of the vacation rental that is next door to me.”

Almost two dozen people spoke on the issue at the two-hour legislative-delegation meeting in Bunnell Tuesday evening. Milo and Kopec summed up the essence of the conflict most compellingly: Milo spoke of the jobs his company created (55, not counting contractors), helping many people in a county riddled with unemployment find livelihoods, while pumping hundreds of thousands of dollars into the local economy in the form of bed taxes and sales taxes. The Hammock home owners’ association voted to keep vacation rentals, he said. He claims that 30,000 guests have stayed in his rentals. “They pump money into the local economy, businesses, some bought homes,” he said. A long train of people who addressed the legislative delegation were Milo’s employees and contractors who lavished his business with praise and appreciation. Milo is no stranger to the fight: he won a $300,000 settlement from the city of Venice several years ago, where he had a similar business the city wanted to shut down.