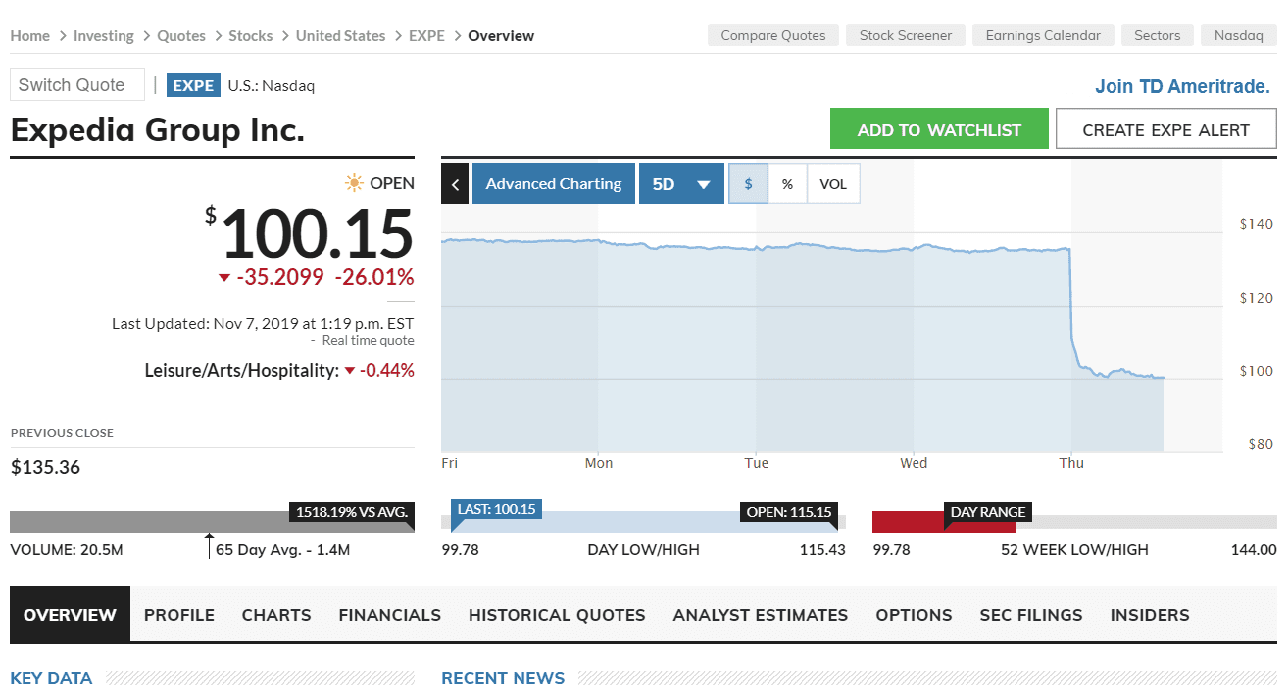 Expedia’s stock is down 26 percent today after the company posted Q3 2019 results showing underperformance. According to Bloomberg, Vrbo posted another decline in revenue growth last quarter, leading to a lowered profit forecast for the year. The company is citing SEO headwinds as one of the reasons for missed earnings and is investing in higher cost marketing channels to make up for lost revenue resulting from organic traffic coming from Google. Now, Expedia is focused on obtaining more direct traffic and direct bookings on Vrbo.

According to one analyst, “When it comes to these business models that are built around SEO, we have to be very careful about how exposed they are.”

In early 2019, Expedia began referencing SEO headwinds related to Vrbo (then HomeAway/VRBO) saying, “. . . the platform consolidation and brand streamlining related to making Vrbo our primary global alternative accommodation brand contributed to continued SEO headwinds. That, along with tough comps in performance marketing channels, were the primary drivers of the deceleration from Q4. We expect the slower gross bookings growth trends to persist in the near term as we work through these changes and lap the elevated performance marketing comps. We have good visibility on what we need to do to optimize our SEO profile on our new platform and expect Vrbo’s gross bookings trends to improve later this year.”

However, by the end of Q3, the struggles have continued.

“We continue to be happy with the trends we’re seeing at Vrbo,” said Expedia CEO Mark Okerstrom. “Unfortunately that is swamped by some of the SEO impacts and some of the re-platforming work and sort of pulling spend away from some of the regional brands.”

When asked to expand on Vrbo’s SEO challenges, Okerstrom replied, “Again a lot of it was around either different modules that they (Google) were introducing into search results that were putting traditional SEO links down the page and then in some cases just steering more queries over to the hotel ads module or to the Google flights module than they had been doing historically which ultimately just resulted in a traffic shift and as we were prominently featured in the Google hotel ads product of course we were the recipient of that traffic. Again pretty pleased with the returns that we see in that channel but not as good as they were in the place the traffic was coming from.”

CFO Alan Pickerill added, “If you’re just thinking about the Google platform to the extent that SEO is pushed lower on the page and people who normally maybe would have transacted through those links are moving to paid links. You’re looking at SEM and Google hotel ads. And as Mark said, it’s good we see good returns on those volumes except for the fact that volumes through SEO are essentially free to us. And so, going from free to anything especially the other Google paid placements can create a sizeable headwind for us.”

Expedia is Investing in More Direct Traffic to Vrbo

Expedia is actively investing in alternative channels to decrease its dependency on Google, including TV, video, social, and event sponsorships.

“I mean we’re actively spending more in digital video, we’re spending more in traditional television,” said Pickerill. “I mentioned experimenting with some of the influence or type things on Instagram and other social channels. As I think you know we’ve got a sponsorship for Champions League in Europe which we’ve been pretty happy with so far. So, the goal here is to help start basically accelerating our direct business and we were happy with the growth in our direct channels in the quarter. And overall, our strategy is to continue to actually differentiate the product and build more direct business over time. So, I think you’ll see us continue to find new channels that are more branded in nature to help build our direct business.”

Okerstrom added, “In terms of SEO headwinds for Vrbo, listen I think the key is here is that we are really putting our weight behind the Vrbo brand and as a result of that it’s done a bunch of platform consolidation work. Really we saw the step up in the headwinds from SEO really start at the beginning of this year and I think we’re into the end of 2020 before we see those types of things lapping, but I think SEO is a headwind for everyone. In the internet I think you saw us call it out and that’s why Vrbo has been pretty focused on defining a real differentiated value proposition, being smart about their brand spend and exploring more digital video type advertising against the Vrbo brand itself which is growing double digits. We like the progress we’re seeing there.”

As Vrbo looks for more direct traffic, rental home owners and managers can expect to see the company more heavily focus on increasing its take rate and eliminating leakage from the site. For example, Vrbo posted approximately 20% growth in transactional revenue, which represented more than 90% of Vrbo’s revenue for the first time.

Vrbo has been actively looking to reduce the number of guests coming to Vrbo to search and then booking directly with vacation rental managers and owners. As we reported last month, the company began removing all supplier branding from its listing pages, taking out vacation rental management company names and logos. Managers and homeowners can expect to see additional initiatives at Vrbo to incent on-platform bookings and to discourage guests from attempting to transact directly with the supplier.

Taking a Cue from Vrbo’s behavior

As Google continues to roll out its direct booking module for vacation rentals and looks to further monetize its users, Vrbo isn’t the only site that is seeing organic results plunge. Google’s changes also negatively affect or will soon affect organic SEO traffic for individual property management companies.

According to Okerstrom, “The trend is that Google does continue to push for more revenue per visitor and I think it’s just the reality of where the world is in the internet and the importance of Google at the top of the funnel.”

As vacation rental managers consider how they are going to utilize Google in their 2020 distribution strategies, increasing dependency on Google can lead a company into dangerous territory in the future.