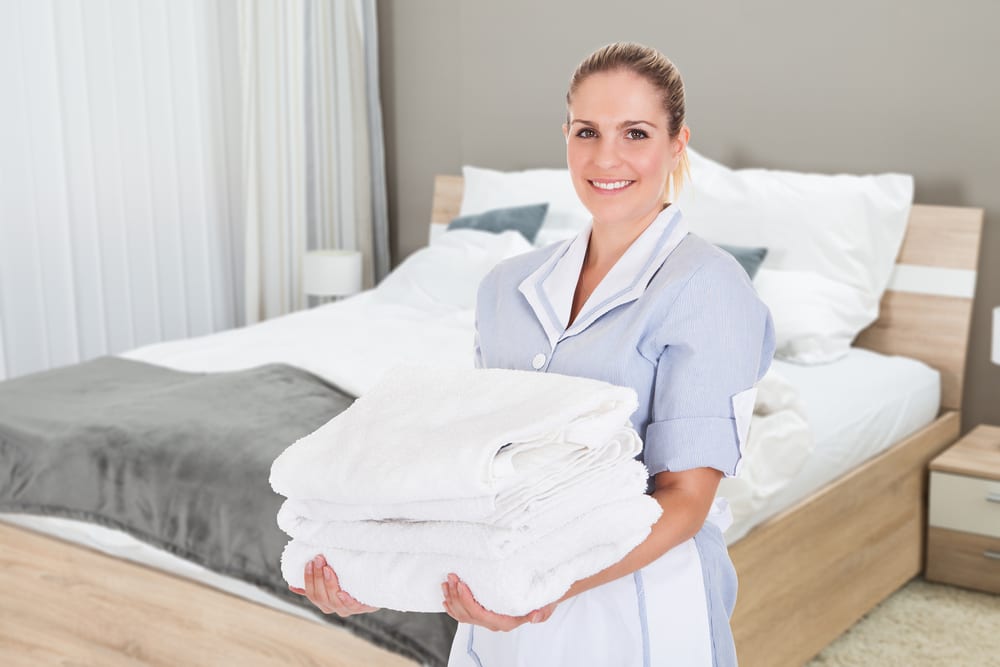 The moment Grace became a room attendant in a downtown Toronto hotel, she was happy to find steadier work after immigrating to Canada from the Philippines on a contract nanny job. But she soon became aware of the strenuous tasks her role as a housekeeper entailed: cleaning 16 rooms in an eight-hour shift and the pressure to maintain a high-quality level of cleanliness for every room, some untidy, others left in disarray.

As a single mother, she’d rush to meet her room quota in order to arrive at her son’s daycare on time, and in this rush to balance work and family, her physical well being became less important than completing hours of tedious and repetitive tasks: cleaning shower tiles from top to bottom, removing stains, polishing toilets, vacuuming carpets, scrubbing coffee pots, lifting heavy mattresses—the reason for one of her injuries.

“Housekeeping is the most demanding, physical job in an entire hotel,” says Grace, who prefers not to share her last name. “You’re in the same positions all day long, every day. Bending, reaching, walking, twisting, squatting.”

Her twenty-three year career as a room attendant reflects that of many hotel housekeepers, the majority of whom are immigrant women of visible minorities. The housekeeping industry has a 40 percent higher injury rate than all service sector workers in Canada. According to the Canadian Centre for Occupational Health & Safety (CCOHS), a housekeeper is estimated to assume 8,000 different body postures every shift. Repetitive motion injuries to the back, neck, shoulders and arms are common.

Added onto this workload is the pressure to appease monthly cleaning audits, which measure how effectively a room is cleaned. Maintaining this level of quality both increases the work and hinders the amount of time a housekeeper needs to complete quotas.

“There’s a certain average for the audit you have to meet,” says Grace. “If you fail, you get stressed.”

Grace and her co-workers have better conditions than most. Their union contract under UNITE HERE Local 75 now limits the workload to 15 rooms and provides better benefits. She can relinquish two to three rooms a day, depending on the situation. At other Toronto hotels, room attendants don’t have these rights and their benefits vary. One of Grace’s friends must clean 19 rooms a day and cannot leave until her quota is fulfilled. Many workers routinely skip breaks, stay late to finish the job and endure physical strain in fear of being replaced.

Current trends in Toronto have also heightened housekeepers’ fears about job security, no matter what hotel they work for. Several hotels are converting into condos, costing thousands of hospitality jobs, while sustainability programs encourage guests to conserve water and energy by forgoing housekeeping, leaving workers without rooms to clean. Many women in the industry see their jobs as disposable. Some are wary to speak up about body strain or anything that could make them appear weak or unable to work.

Those who do are either supported by management or sometimes discounted. According to a recent Oxfam Canada report, which underlined the precarious work of housekeepers at several major hotel chains in Toronto, the workload of room attendants is growing and so are injury rates. As one general manager in Toronto noted in the report, hotel rooms require much more cleaning than they did years ago, while guest expectations have increased. Despite injuries, many continue working in the same job.

“Housekeeping is the heartbeat of the hotel and usually the most underappreciated function.”

One case highlighted in the study is that of Kerry Ann Palmer, a Jamaican immigrant who has been working in a downtown Toronto hotel for four years. Three years ago, she reported a wrist injury to her supervisor who made her continue working without any modifications to her job, despite a doctor’s note in her favour. She now requires a brace at all times.

“These women feel stuck; they’d like to leave, but this is the only experience they have,” says report author Diana Sarosi. “The work is too exhausting and demanding for them to take any courses or additional training. They are so enwrapped in survival, getting enough hours, getting things done. If they don’t have enough hours, then it’s about finding another job for extra income.”

A room attendant’s well being largely depends on the culture of the hotel management, along with the type of programs that are implemented.

Amrita Bhalla, senior HR executive with more than 10 years of experience in the luxury hospitality industry, lecturer at the Ted Rogers School of Hospitality and Tourism at Ryerson University and currently managing director of A.B. Consulting, says the way housekeepers are treated can depend on the management philosophy in a particular hotel.

“The leadership style of the general manager can really set the tone for how they want all their employees to be treated,” says Bhalla. “Housekeepers have such an important job and it’s really important to recognize and celebrate them.”

She says “housekeeping is the heartbeat of the hotel and usually the most underappreciated function.” Room managers should have a close link to their staff and “make sure leadership is quite present” at staff lunches or events. This is one way to help facilitate communication between departments.

When it comes to occupational health and safety, hotels between six to 12 employees must have a health and safety representative, while hotels above 20 employees are required to have a joint health and safety committee. Many establishments implement programs and even focus groups designed to find ways to avoid injury. But from Grace’s experience, these programs aren’t taught on an ongoing basis, even as new employees come and go. If a housekeeper has an injury, it is communicated to management, but there needs to be more intervention ahead of time.

“Be consistent and educate the workers on how to better use body positions to complete duties,” she suggests. “Because we have a quantity of rooms that have to be finished, the workers rush. They don’t care about the movements and positions, and at the end of the day, there is a lot of pain in their bodies.”

Programs to help housekeepers relieve body strain should include the use of visuals and videos, something Bhalla strongly believes in. She suggests companies get staff involved in the videos, while showing them how to use proper positions. Translating health and safety materials into the top three languages spoken among housekeeping staff is also key. It’s a diverse workforce comprised often of visible minorities where the first language may not be English. Overall, cutting training tends to happen in the short term, but will eventually catch up with managers.

“If you don’t do the right kind of onboarding and orientation for new hires in housekeeping, then it just becomes harder to correct it,” Bhalla cautions. “You’ll possibly have to deal with performance issues that aren’t the fault of new employees because they were never trained.”

Besides improving body postures and using lighter equipment, CCOHS suggests hotels find new approaches, other than strictly ergonomic ones. Options include job rotation where workers move between different tasks, at fixed or irregular periods, and team work to provide greater variety and more evenly distributed muscular work. The whole team is involved in the planning of the work and each team member carries out a set of operations to complete the whole product, allowing the worker to alternate between tasks. It is also important that housekeeping staff be informed about hazards in the workplace, including the risk of injuries to the musculoskeletal system.

Proper training shapes lifting habits, so workers need to adopt practices that reduce fatigue. CCOHS advises doing heavier tasks at the beginning of a work shift, rather than at the end when fatigue is at its maximum. When a person is tired, the risk of injuring a muscle is higher.

Jane Sleeth, senior national consultant at Optimal Performance Consultants says ergonomics training is usually a case by case basis with hotels, but there is a big need for them to become proactive.

“Some hotels have great human resources in place and they regularly ask us to provide training with updates and new topics,” she says. “Others have had our team train, but haven’t followed up. Others ask us for quotes and nothing further occurs.”

Education should be focused on proper body mechanics, work/rest/break schedules and stretches prior to certain tasks, she says. Housekeepers should learn how to self-treat musculoskeletal injuries and know when to visit a physiotherapist or chiropractor. There should also be training on actual case scenarios with feedback on body mechanics and the proper use of equipment to avoid ergonomic exposures.

Many hotel owners embrace employee concerns. Many truly care about the well being of their housekeepers and strive to implement programs that will support their work. They understand that housekeepers are frontline staff who have the power to alter the reputation of a hotel. After the Oxfam report was released, Susie Grynol, president of the Hotel Association of Canada, stated that the study doesn’t “paint an accurate or balanced picture” of the industry in Toronto, and that its members have a number of compliance measures in place to ensure not only high health and safety standards, but also employee satisfaction. Many hotels, she notes, have acquired ergonomically-friendly tools to assist with cleaning.

“Just because rights exist in a jurisdiction, doesn’t mean that everybody in that jurisdiction is treated with all the fairness and dignity that one should expect at work.”

Despite these efforts, the most calls the United Food and Commercial Workers (UFCW Canada) receives are from women working in the hotel industry who feel they need added protection to better negotiate fairer workplace standards. More often than not, the women are new to Canada and come from marginalized communities within large urban centres like Toronto and Vancouver.

“Having rights on the books and being treated fairly at work are not always the same thing,” says Derek Johnstone, special assistant to the national president of UFCW Canada. “Just because rights exist in a jurisdiction, doesn’t mean that everybody in that jurisdiction is treated with all the fairness and dignity that one should expect at work.”

Many operations are franchised, he points out. Owners may operate according to standards, but will run their businesses the way they believe a business should be run, with their values dictating how to communicate with staff.

“Some franchises are, without a doubt, good employers, but you have a lot who are not responsible employers,” he says. “This is the reality — provincial ministries of labour just don’t have the resources to ensure that every employer out there is acting responsibly.”