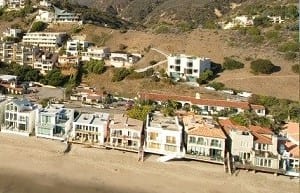 The Malibu City Council voted unanimously on Monday to execute subpoenas to vacation rental websites that may not be paying a 12% occupancy tax.

Despite some trepidation, the Malibu City Council voted unanimously on Monday night to subpoena vacation rental websites that may not be collecting transient occupancy tax (TOT), or have listed properties that are not registered to pay the tax.

Monday’s 5-0 vote paves the way for the city to crack down on rental sites posting short-term rentals whose owners have failed to register and pay a TOT.

Although council members mentioned that the 12% tax is a lower burden than neighboring cities levy on their residents, staff believes Malibu stands to collect hundreds of thousands of dollars in unpaid tax revenue.

“I’m not thrilled with the idea of creating subpoenas and doing it that way, but I understand why we need this,” Mayor Pro Tem John Sibert said during Monday’s meeting.

“I don’t like to go the subpoena route, but these websites, like Airbnb, aren’t going to give us the information without it, unfortunately,” she said.

“We don’t even know if Airbnb would give us this information unless we ask them,” said Sibert, who eventually voted with the rest of council to issue subpoenas.

Blair Pettigrew, representing a Malibu Colony property owner, requested the council investigate the nuisance of vacation rentals in residential areas of the city and to propose an ordinance against these types of rentals.

Council members agreed that the noise and disruption in neighborhoods was a major concern.

“This is not a revenue-generating item. The reason we’re doing this, the genesis of this, was we’ve been getting a tremendous amount of complaints from residents throughout all areas of the city,” said Councilman Lou La Monte.

“We definitely need to start finding out more information about it, and I think this is one of the few ways I think that we have the power to do that,” he added.

Councilwoman Joan House also weighed in, stating that issuing these subpoenas will level the playing field.

“Right now we’ve got all the hotels and the motels and a lot of people in compliance, and this is just creating a fair and equal playing field,” she said. “I will support this, basically, because it’s a fair thing to do.”

The council did not discuss whether the city would get bogged down in legal fees or lengthy court proceedings.

“The advantage of a subpoena is that it’s enforceable by a court,” said City Attorney Christi Hogin, adding, “so if one of the websites refuses to comply with the accusation, we can go to a court to enforce it, and they of course have consent powers.”

“We’re going to send out subpoenas and the websites are going to comply with them, that’s the plan,” responded Hogin.