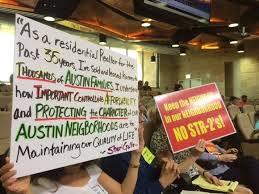 Companies in Austin, and Austin’s overall economic vitality, will be impacted by your decision on short-term rentals.

You have seen an economic impact study which shows more than 2,500 jobs in Austin are supported by short-term rental activity and that the Austin area receives $234 million dollars per year in economic impact.

This does not include the innovative technology companies that choose to make Austin their home, including; HomeAway, TurnKey Vacation Rentals and many more. These companies employ more than 2,000 locals and are growing.

Austin has become a travel technology hub in part because of the success of HomeAway, which was recently acquired by Expedia. Because of homegrown innovators like HomeAway, other startups have moved here, or launched here such as KeyToAnywhere, BedandBreakfast.com, OnceThere, TurnKey, RideScout and Departure Lounge to name a few.

The technology eco-system which these companies created have the potential to turn Austin into a “Silicon Valley for Short-Term Rental Innovation” which will benefit tourists, homeowners, neighborhoods and businesses, both here in Austin and globally.

Your decision to turn an ordinance which was effective into an industry-killing regulation because of a small handful of problem operators will have a much larger effect; it will touch off a series of events causing employers to look elsewhere to locate, bringing their innovations, jobs and economic impact with them. You will effectively throw away the industry-leading legislative framework which the Council put in place over three years ago.

Please take time and consider the greater impact this decision will have on our community. Austin should not take our technology leadership status for granted. We are only here because our community draws great talent, and your decision will push talent and innovative businesses away.