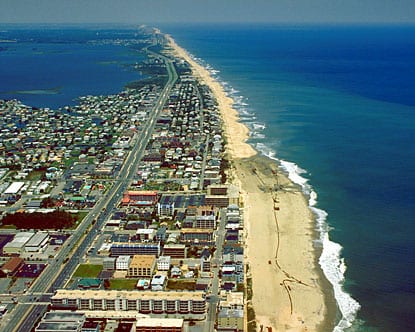 OCEAN CITY – MD Coast Dispatch –The Mayor and City Council agreed Tuesday to explore further an alternative suggested to the proposed R-1A district that has the backing of the local real estate industry.

Chris Mitchell of Coldwell Banker Vacation Rentals came before the council to present alternative concepts to help control rentals in R-1 Single-Family Residential District as opposed to the proposed R-1A district that would ban rentals shorter than one year from the neighborhoods.

If an R-1A district is added to the code, a neighborhood can apply to be rezoned and a public hearing would be held before the Planning and Zoning Commission to consider the request. The commission would then forward a favorable or non-favorable recommendation to the council for the final decision.

The council discussed the proposed R-1A district last month and agreed for the concept to be included in the upcoming update of the Comprehensive Plan but wanted other solutions to come forward in the meantime.

“It came to light the best thing we can do as an industry and as a town is to focus more on occupancy levels,” Mitchell said.

Currently, R-1 zoned properties are restricted to be rented to no more than four unrelated people, Mitchell stated. It is difficult to enforce this rule as there is no easy way to obtain information on the familial status of occupants at the property. Therefore, it is more important to ensure that the property is being properly marketed by the owner and/or rental company and that the property’s maximum guest occupancy is within the limits of Ocean City.

Mitchell suggested creating a separate Rental License Application for properties located within R-1 zoned areas that wish to do short-term vacation rentals. Current R-1 zoned properties renting for 12-month periods would not be subject to the revision.

Also, Mitchell’s proposal suggested increasing the Rental License Application fee for R-1 zoned properties from the current $141 to $191 and use the additional $50 as an inspection fee to control the costs of the onsite inspection by the town. He suggested a master list of all R-1 zoned rental licenses be maintained as a public record and available on the town government’s website, allowing other owners in the community to know which properties are being marketed, what the assigned occupancy limits are and who the contacts for the property are in case of an issue.

Mitchell furthered another change could be requiring from the property owner information how they market their property, either the rental company they use or if they market their own, and what form of marketing, including rent-by-owner websites, they use. This will allow the town to verify that the property owner is in compliance with the approved occupancy limit and that it states clearly that no more than four unrelated persons can occupy the property during the rental period. Property owners would need to disclose that the property is located in an R-1 zoned area to their rental company and to potential renters on both their marketing materials and rental agreements.

Additionally, this will provide the town with additional contact for who is representing the property if problems arise. The “emergency contact” section of the current Rental License Application may not give the rental company used, if the owner chooses someone else as their emergency contact.

The final suggestion is to implement a system of warnings and/or fines to the property owner in the event there is a failure to comply with the required occupancy limits.

If the property is found to be marketed for more than the agreed upon occupancy as issued with the license, the Town of Ocean City could send a warning notice for the owner to cease and desist in their marketing within a specific time period or face fines and/or revocation of their rental license. A lack of response or complaint would result in the fining system and revocation until such time as the fines are paid and the marketing is corrected. If an actual rental at the property is found to be exceeding the agreed upon occupancy, and the owner takes immediate action to the correct the problem, the incident can be recorded as a warning. If no action is taken and the property is over occupied, the town could suspend the rental license and require the renters to vacate due to code violation.

In researching the matter, Council Secretary Mary Knight found that neighboring resorts of Virginia Beach and Rehoboth Beach are struggling with the same issue and are considering legislation similar to the proposed R-1A district.

“We are at a point to decide whether or not Ocean City wants to be a tourist destination or remain a family-residential community. I think you need buy-in from those people who have signed the petition and other organizations. My major concern is there has been no communication between the rental agencies,” said Knight.

If the recommendations were to be implemented, the town’s application process and database would have to be reformatted with an unknown cost at that time.

As a member of Coastal Association of REALTORS® (CAR), Meehan vented his frustration that after the public hearing over a year ago the organization didn’t come forward with a solution.

“In my opinion, they let it go by thinking it would fix itself, and it didn’t,” the mayor said. “There are some things here that could be very helpful … This is a difficult issue and a balance to be upheld here. We want to ensure we protect the sanctity of R-1 areas, and we hold them in very high regard, but there are also a lot of people in the R-1 areas that buy properties to use on a part-time basis until they move down here to retire. The situation as it exists today is not working, and if we had this in place now we would be in a better situation today then we are in the moment. It deserves consideration, and I would hope the council would try to develop it not as an alternative but as part of the solution. There is a lot at stake here.”

Councilman Wayne Hartman agreed the suggestions are a good first step but not as an alternative.

“I don’t think people in the R-1 should have to go through three offenses. You are being disturbed and that is not what you expect when being in a R-1 neighborhood,” he said.

Councilman Dennis Dare made a motion the license inspector review the suggestions, and work with the zoning administrator, city solicitor and city manager to bring a proposal back to the council as soon as possible for consideration. The council voted unanimously to approve.

“The concept was approved for endorsement by the CAR Board of Directors as a means to address short-term rental concerns voiced by some homeowners in Ocean City’s R-1 Single Family Home Zoning Districts,” the statement read. “A majority of Ocean City’s rental agents are not members of CAR, therefore it was prudent the association find a rental industry partner prior to suggesting an alternative R-1A concept.”

CAR Board member Joe Wilson added, “CAR’s interest in this matter lies with the ability for consumers to buy and sell investment properties in those neighborhoods. We are so fortunate to find a strong partner in Chris Mitchell of Coldwell Banker Vacations who can tell us what the rental industry is willing to do in order to address the concerns of those who support restrictions. We hope this concept is a first step toward the eventual resolution of this matter.”